Posted on9 Years ago by Sheepskintown
Love0 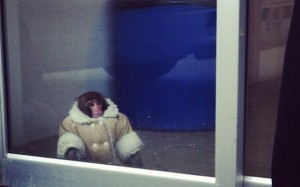 The monkey ran loose in the department store for less than an hour. The CBC reports animal services were brought in to capture the monkey. It was brought in without any major incident. Despite its fleeting freedom, the escaped style icon still captivated people on both sides of the border. There's already an IKEA Monkey parody account. Also, everyone seems to love the sight of an adorable monkey running free in a winter coat: