A Brief History Of Merino Wool

Posted on6 Years ago by Sheepskintown
Love0
Merino wool is famous for its high quality. This wool is very soft and feels very comfortable against your 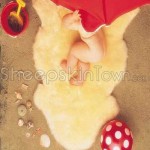 skin.  These sheep are famous for their thick, fine fleece that is highly suitable for spinning and weaving into a fine fiber that is used mainly for clothing. Merino wool has quite a long and interesting history, so this post will give a brief history of how this particular wool type came to be so famous. The merino breed of sheep originally came from south Portugal from where it was introduced to Spain. A fine wool monopoly was built in Spain, as they were noted for their fine wool. Spain introduced the merino breed into Australia in the late 1700's which kick started the Australian merino sheep industry. In Australia the farmers did further selective breeding which soon produced the authentic Australian Merino wool, with its even finer wool. Australian merino sheep continue to this day to play a major role in international fashion due to their high quality. Merino wool was introduced to North America in the early 1800's by the United States Ambassador to Spain. The wool was imported from Portugal. From 1810 and onwards, the merino wool industry shifted to mainly Germany, United States and Australia. Australia has the most advanced wool industry due to their highly developed wool marketing system. They have a trained workforce of 20,000 wool classers who prepare clean white merino wool for processing. Australia is also the world's present day leading producer of wool, of which most comes from merino sheep. Due to the timeless appeal of merino wool, fashion designers all over the world produce quality wool apparel that showcases nature's amazing fiber.
Previous article Next article